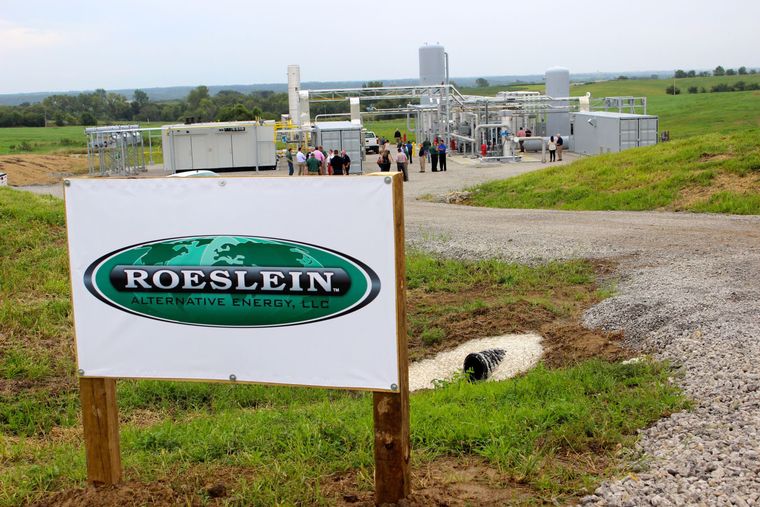 Roeslein Alternative Energy celebrated the completion of the first phase of its alternative energy project in northwest Missouri. This is the largest livestock manure to energy project in the United States. Impermeable synthetic covers are now installed on 41 of the 88 existing manure lagoons at nine Smithfield farms in northern Missouri to capture methane gas. Equipment has been installed on one farm to remove impurities from the biogas to create pipeline quality renewable natural gas. As of July 1, RHG from anaerobic digestion of hog manure was injected into the national pipeline using an interconnect that has been install at Ruckman Farm. Duke Energy in North Carolina has agreed to purchase a portion of the RHG from this site. Roeslein Alternative Energy is in the process of installing similar technology at other farms in the Smithfield system in Missouri on smaller scale. The next phase in this innovative project will be to convert biomass from prairie grass into clean usable energy. (Journal photo by Doug Rich.)

The first phase of this project is now producing RNG from livestock manure and delivering it into the national pipeline.

The project involves placing impermeable covers over hog manure lagoons to capture methane gas created by anaerobic digestion. This gas is then upgraded to renewable natural gas and injected into the national gas pipeline grid. This has now been done on the Ruckman Farm, one of nine farms in the Smithfield system in northern Missouri. The plan is to repeat this on all nine farms. Chris Roach, RAE director, said the operation started injecting gas from the Ruckman Farm into the pipeline in June.

According to RAE, impermeable synthetic covers are now installed on 41 of 88 existing manure lagoons at nine Smithfield farms. A typical lagoon covers 4 acres and holds 15 million gallons of manure. The cover traps the bio-gas given off by the decomposing manure, it is then captured and piped to a central cleaning unit, chilled to remove moisture and then purified into 98 percent pure methane gas.

RAE plans to convert all nine hog finishing farms to anaerobic digesters by 2019. Roach estimated the operation will recover 2.2 billion cubic feet of pipeline quality natural gas per year from the 88 lagoons.

The next project at the Ruckman Farm is to harvest strips of native prairie grass and turn that biomass to produce more renewable natural gas. The plan is to repeat this at the other farms as well.

“This project is the culmination of a five year collaboration and partnership with Smithfield,” said Roach. “It really started with this vision that Rudi Roeslein gave us that is coming up with projects that produce renewable energy but also facilitate the expansion of native prairie.”

Roach said the long-term goal is to establish 30 million acres of native prairie over the next 30 years.

“The prairie grass will bring the other benefits that we are really focused on such as ecological services and wildlife habitat,” Roach said. “The vision of the company really talks about taking waste streams, turning those into energy and using those energy projects to use prairie grass as a feedstock and then use that as the economic driver to create economic incentive for landowners to plant native prairie grass. This project is a milestone along that path.”

Rudi Roeslein has invested $40 million of his own money in this project. He is a businessman and he expects this system to be viable as a business.

“This has to succeed as a business model,” Roeslein said. “I invested my own money in this without asking for government subsidies or tax abatements.”

“I don’t think there is a single farmer here today that says they don’t want wildlife on their farm,” Roeslein said. “But they are trying to make a living and when that wildlife puts a big dent in their corn and bean production then they question whether they can support the wildlife and their families. We can do this in a way that is profitable for famers.”

Roach said the anaerobic digesters for biomass will be ready on the Ruckman Farm in the next year.

“This is a world class operation that I think all of Missouri should be proud of,” Roeslein said. “Missouri has an $8 billion agricultural industry and what I hope to do is demonstrate is that we can take a lead in alternative energy as well.”