OMAHA (DTN) — Northern Missouri farmer Rudi Roeslein enjoys nothing more than flushing a healthy buck out of the tall grassy prairies on his 1,600-acre farm. Though his love of hunting was the reason for his fascination with developing grassy habitats, Roeslein learned quickly that it could be far more than a hobby — it was a potential business opportunity. 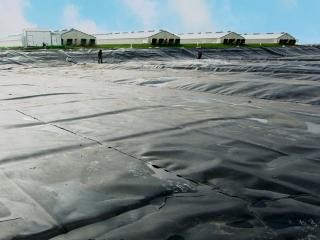 Here’s the vision: The Roeslein Alternative Energy founder, who is an engineer by trade, plans to use methane-capture technology with impermeable covers installed on 88 lagoons on nine hog confinement farms in northern Missouri. Methane will be captured and delivered to reactors. There he plans to use grasses and other biomass crops including primarily cover crops, as a supplemental energy source to produce renewable natural gas.

According to the “Biogas Opportunities Roadmap” published by USDA, EPA and the U.S. Department of Energy in August, there are more than 2,000 sites producing biogas in the United States. There is the potential to install more than 11,000 additional biogas systems.
“My concern is with the ethanol industry we’re gobbling up more land with corn and beans,” Roeslein said. “We don’t look at land as assets. We look at what makes the best return. No one seems to be concerned about wildlife habitat.”

Roeslein entered into an $80 million partnership with Murphy-Brown of Missouri, LLC, a livestock production subsidiary of Smithfield Foods, Inc., in an attempt to capture methane from hog confinement operations. The project is serving a dual purpose — providing new farm revenue through renewable natural gas sales in rural communities, and the environmental benefit of capturing methane — considered to be the most dangerous greenhouse gas.

Roeslein said his company plans to have about 25 covers installed by the end of October at two of nine farms. Covers are expected to be installed on all 88 lagoons by the end of 2016 — capturing methane from more than 700 barns, each containing 1,100 finishing hogs at any one time. The covers turn the lagoons into anaerobic digesters, where microorganisms decompose the manure in an oxygen-free environment. Biogas rises to the top where it will be collected and cleaned of impurities.

Roeslein said what remains is more than 98% methane with nearly the same chemical composition as natural gas used for vehicle fuel or injected into the natural gas grid system. The indigestible solid residue can be used by local farmers as a natural fertilizer.

FUTURE EXPANSION
Depending on the success of the project, he said he’s hopeful it is a model that will work across the country. Since manure is classified as a D3 cellulosic biofuel feedstock in the Renewable Fuel Standard, Roeslein said it presents an opportunity for farms to benefit from renewable identification numbers, or RINS.

For years, Roeslein has experimented with a variety of cover crops and native grasses on about 400 acres. Roeslein said the idea of farmers producing more renewable energy on the farm using marginal lands and hog confinements, would be a good way to address the food and fuel needs of a growing world population.

“If you look at the ag industry today — land sits fallow from October to March,” Roeslein said. “When I fly over I see those assets just sitting there. In Germany cover crops are being planted, put nutrients back in the soil. There’s no way we can put two million pigs on landscape and not have an environmental disaster. We can use anaerobic digestion to create an energy source. We can eliminate pathogens in manure. It’s not necessarily limited to the size of farm.”

Grasses grow “really, really well in Missouri,” Roeslein said, and have been a key in his efforts to restore marginal ground on his farm. In addition, because cattle herds have dwindled in northern Missouri, there is a significant amount of hay available for potential renewable natural gas production.

“The economic benefits to rural America could be significant,” he said. “If we can set up an operation to harvest land and that land is now used 12 months out of a year, there is going to be billions of dollars in potential savings to society. A lot of kids are leaving rural America. Our kids today don’t necessarily want to work as hard as we did.”

NATURAL GAS OPTIONS
Roeslein said producing methane to sell to the power grid would net only 3 to 4 cents per kilowatt hour, making it more valuable to sell the gas to energy companies and consumers instead. Right now there’s no financial incentive to give to the power grid, he said. The concentration of finishing hogs in the Midwest could produce enough manure to create several hundred million cubic feet of renewable natural gas annually.

“When I look at the wasteland in China,” Roeslein said, “because of population growth now they have giant lakes and reservoirs polluted. We need to look at streams as problems. How can we control them up front? How can we help and motivate farmers. If we keep legislating farmers we’re going to bury them. The goal is to demonstrate the system and learn whether it can work in other regions of the country.”